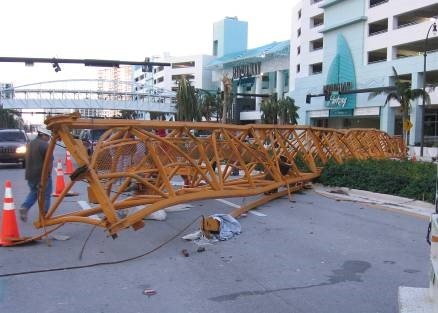 Hurricanes and Construction Cranes - Look Out Below

With the 2017 hurricane season coming to an end Harvey, Irma, Jose, and Maria affected large parts of the USA and Caribbean.  Examples of roof uplift can be found in numerous structures. If a roof is not properly tied down the entire roof structure can be blown away as in this photograph from St. Thomas.

During Hurricane Wilma a tower crane at a high-rise condominium construction site in Hallendale, Florida suffered a collapse.  The building, a 28 story concrete structure, is situated between the Atlantic Ocean and Route A1A, and was under construction at the time of the collapse.  The crane was situated on the west side of the building and was connected to the building at the tenth and twentieth floors.  The crane was over 300 feet tall.  The crane broke at the twentieth floor; the top of the crane fell to the ground while the lower portion was damaged but remained attached to the building.  CCA was requested to review the circumstances of the collapse of the crane and provide opinions as to the cause.